Turn Your Raspberry Pi Into a Music Player Server

A few months ago I published My Quest to Build the Ultimate Music Player, where I described some of the trials and tribulations that led to Groove Basin, an open-source music player server that I've been building off and on for almost 4 years.

It ships with a web-based client, which looks like this: 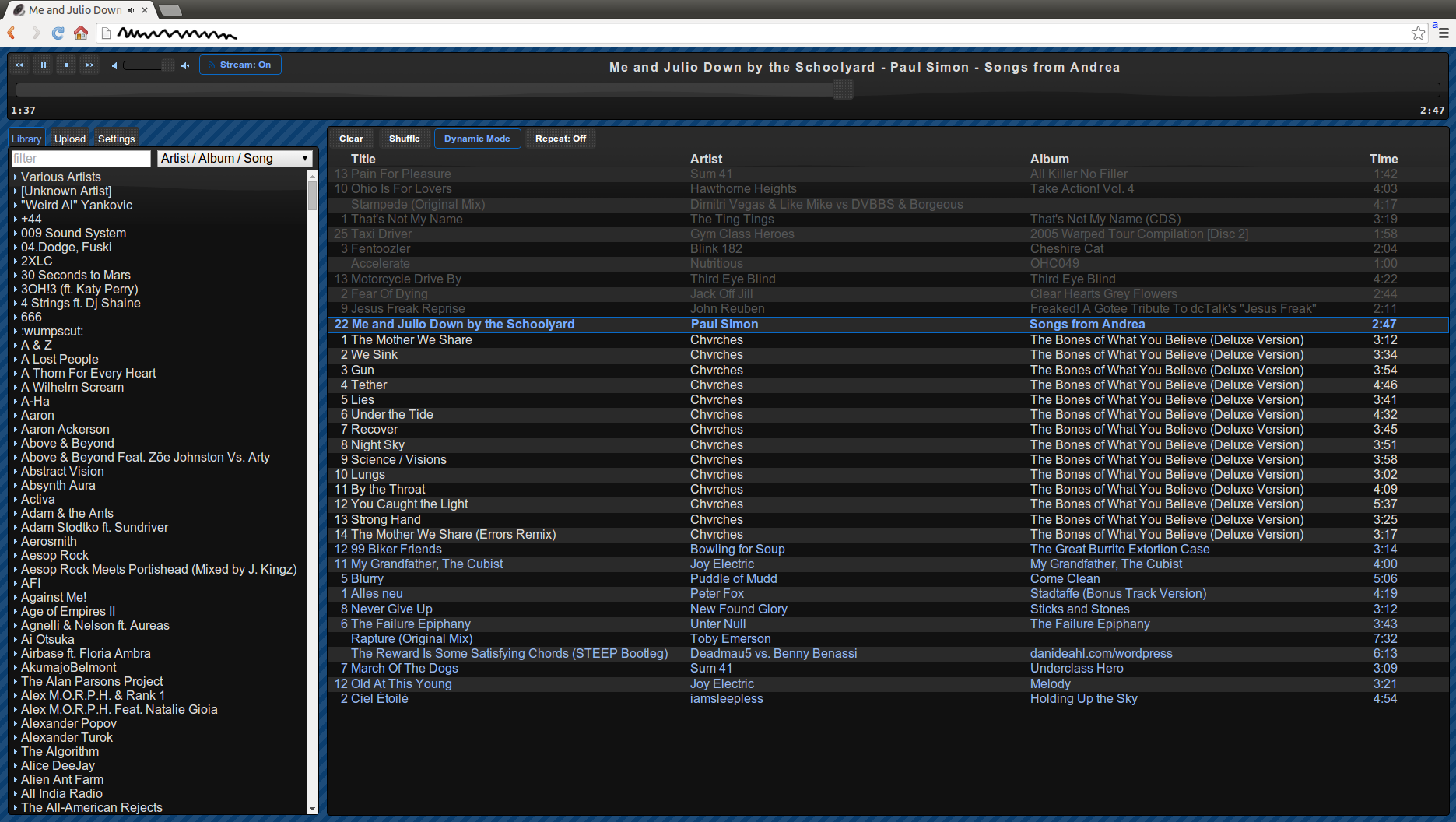 You can also tinker with the live demo version.

If you install this on a Raspberry Pi, you can attach speakers to it and use it as a music player which you can control remotely, and you can remotely listen to your music by pressing the "stream" button in the browser.

Before I get into it, however, I would like to point out that if you're deciding whether or not to get a Raspberry Pi, the answer is no. The Raspberry Pi is overhyped - this is why I'm writing this guide - and there are much better alternatives. I'll mention one here, the Beagle Bone Black. Update: another good one: Hummingboard

Why you should get this instead:

If you are like me, and you unfortunately purchased a Raspberry Pi before you became educated about better options, then you'll have to jump through some hoops to get this working. This article will hold your hand and guide you through all the hoops so that you don't have to waste time figuring it out yourself.

I'll start this guide at the point where you have a fresh Raspberry Pi and don't even have an operating system yet. If you're past this point then skip ahead.

Head over to the Raspberry Pi downloads page and grab the Raspbian Debian Wheezy torrent (or download directly if you're not l33t).

Unzip to get the .img file out and flash it to the biggest SD card you have. You'll want lots of room for music!

I'm on Ubuntu - all I had to do was right-click on the .img file in nautilus, Open With, Disk Image Writer: 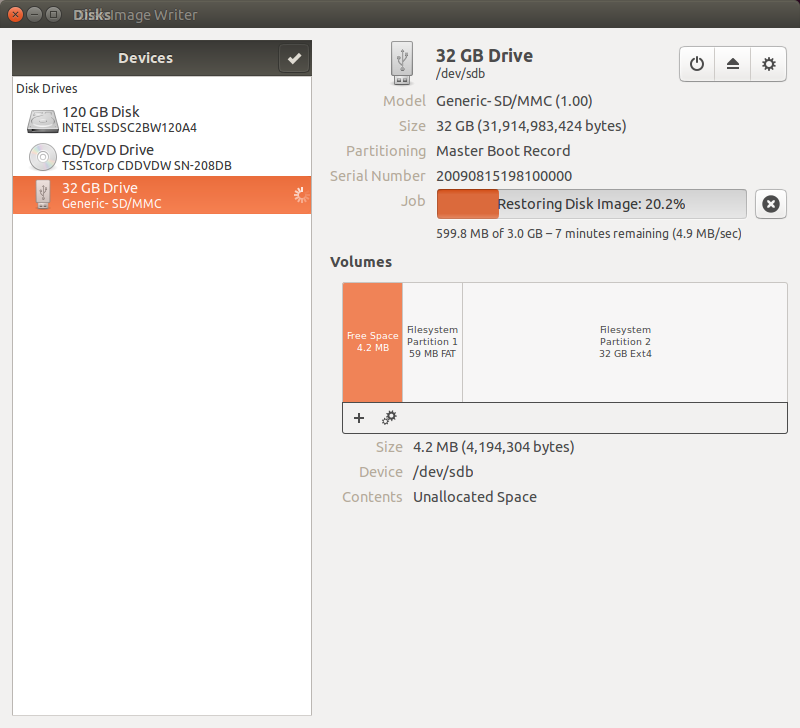 I'm sure there are plenty of ways to get the job done, this was easiest for me.

Once that's done, find a keyboard, monitor, and HDMI cable so that you can see what you're doing. Our goal is to get SSH access going as soon as possible so that we can work on the Pi without plugging things into it other than the power and network cables.

Once the Pi boots up for the first time it gives you a menu of things you can do. Here's what I did:

Now let's set it up so that it always binds to the same IP address when it boots up. These are the settings I used, obviously you should tweak them to your network's needs:

Now we can unplug the TV and keyboard, we won't be needing this junk anymore. Plug that Raspberry Pi into your network and power it on!

On your normal computer that you're used to using, you can now ssh to the Pi, something like this:

It makes you type in your password, but we can fix that:

Now connecting to the Pi is as simple as ssh pi.

The first thing to do here is update all the outdated packages to the latest.

Hmm, what's that I see there?

Alright, at this point we are able to ssh into our Raspberry Pi and all the packages that come installed are fully updated.

I recommend that you do this work in something like screen or tmux so that if the connection is dropped, the commands we're running will continue. Also this allows us to disconnect and go do something else while the Pi crunches numbers.

I'm going to explain how to do this one step at a time for clarity. However, note that there are essentially 3 compilations that will take a very long time, so if you want to start those 3 in parallel and then walk away from the computer for 8 hours or so, you can skip around this guide and start them all in parallel. Those 3 things are the make steps of:

Get the libgroove source code and create a build folder inside of the source:

Let's build in debug mode so that if we happen upon any errors we can get a useful stack trace.

Note, you can skip the following step - it takes a minute or two to complete, this particular command is just for your information, and I have reproduced the output below:

It's missing these libraries:

We could let libgroove install with the bundled dependencies, but it will be easier to just install those dependencies on the system first. Let's do that.

Luckily chromaprint is in the repository already:

Next we compile the easy one, libebur128.

Now compile and then install the code:

Argh, it put the library files in /usr/local/lib/arm-linux-gnueabihf/ due to a bug in the Debian cmake package.

Let's hack around that:

Next let's get SDL2 going. What's wrong with the SDL that comes with the Raspberry Pi? Well it's version 1.2 and libgroove depends on version 2.

Find the URL for the source code of the latest SDL2 version on the SDL download page.

SDL needs an audio backend to work, so we install that now, before the configure command:

We only need the audio features of SDL2 and in fact some of the video stuff can cause compilation problems. So we'll disable all the features we don't need when we configure.

This could take a while, but when it's done you should see a line like this:

It's important that you have an audio driver other than disk, dummy, and oss.

Find something to do, this is going to take upwards of an hour to complete. Or if you want to slap your poor Raspberry Pi into submission, this would be the time to skip around in this guide and get libav compiling at the same time. But again, I'm going to pretend that you're doing this sequentially and let you deal with thinking about how to skip around the article.

So at this point that long compilation process succeeded and we're ready to install SDL2:

Let's go back to your home folder (or wherever you decided to do this):

Grab the URL to the latest libav 10 release from the libav downloads page.

Let's get some prerequisites out of the way and then start configuring:

Again the Pi is going to have to work really hard to complete this configure command, especially if you're simultaneously compiling SDL2, so don't worry if it takes a minute or two.

This is going to take upwards of 8 hours. Seriously, I'd start this one and then go to bed. If you're trying to start all the compilations simultaneously, you might also want to start Node.js compiling as well.

So at this point, you've waited a very long time and the Pi has successfully finished compiling libav and SDL2, and you have installed both of them. If this is not true, then you need to figure out why and fix it before progressing with this guide.

Ah that output looks much better than before.

This make should be relatively quick.

At this point we have the necessary libraries installed:

Now we need Node.js. Get the latest stable source code from the downloads page.

Now it is time to start Groove Basin, the music player server.

This step can take several minutes - it downloads and compiles Groove Basin dependencies.

Let's make the music directory if we don't already have one.

Copy all your music there at this point if you have any.

Now you should be up and running. If you want to change configuration options, kill the server with Ctrl+C and edit config.js.

Enjoy! Feel free to follow Groove Basin on GitHub, file a bug report or feature request, or join #libgroove on irc.freenode.org to discuss or get help troubleshooting.